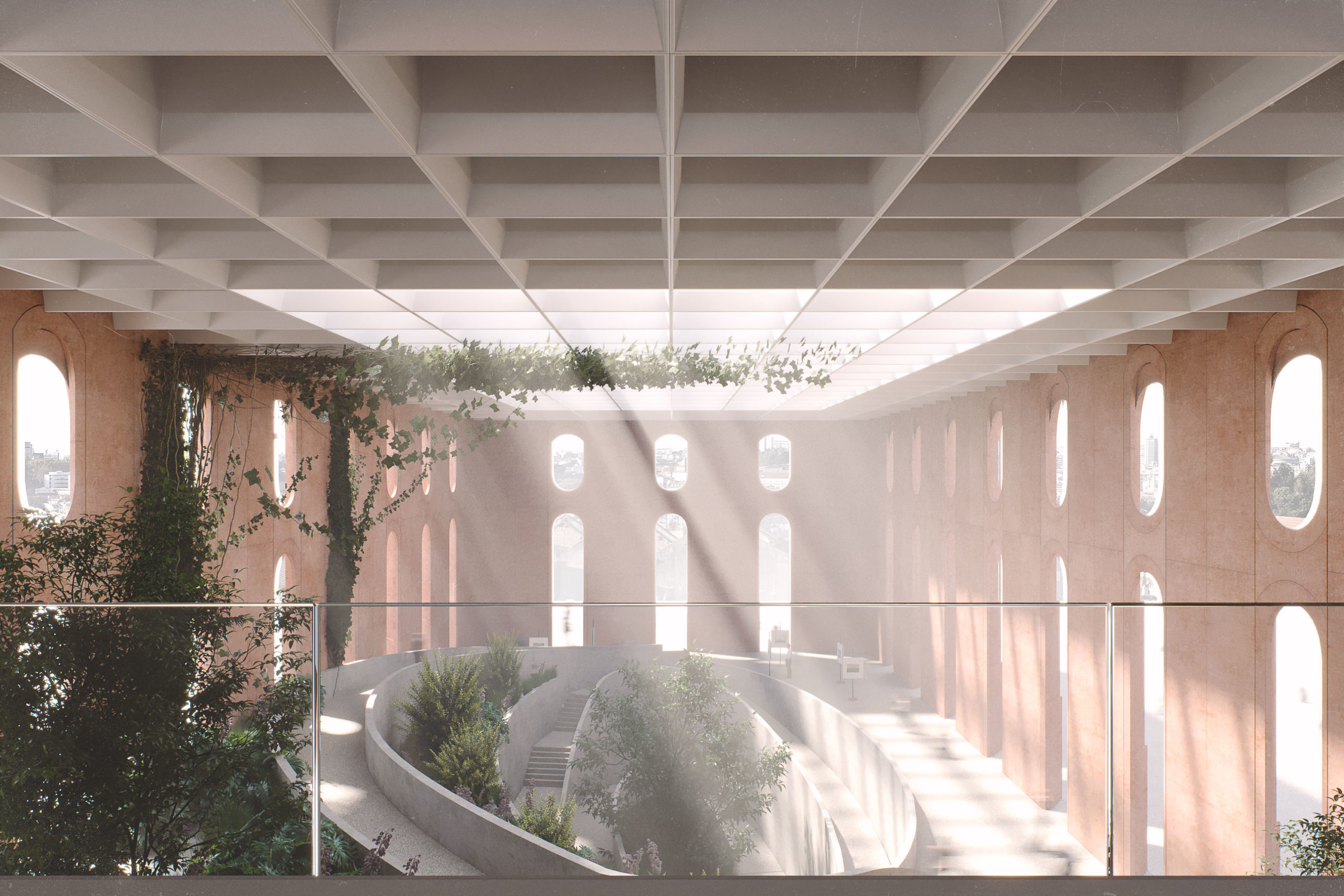 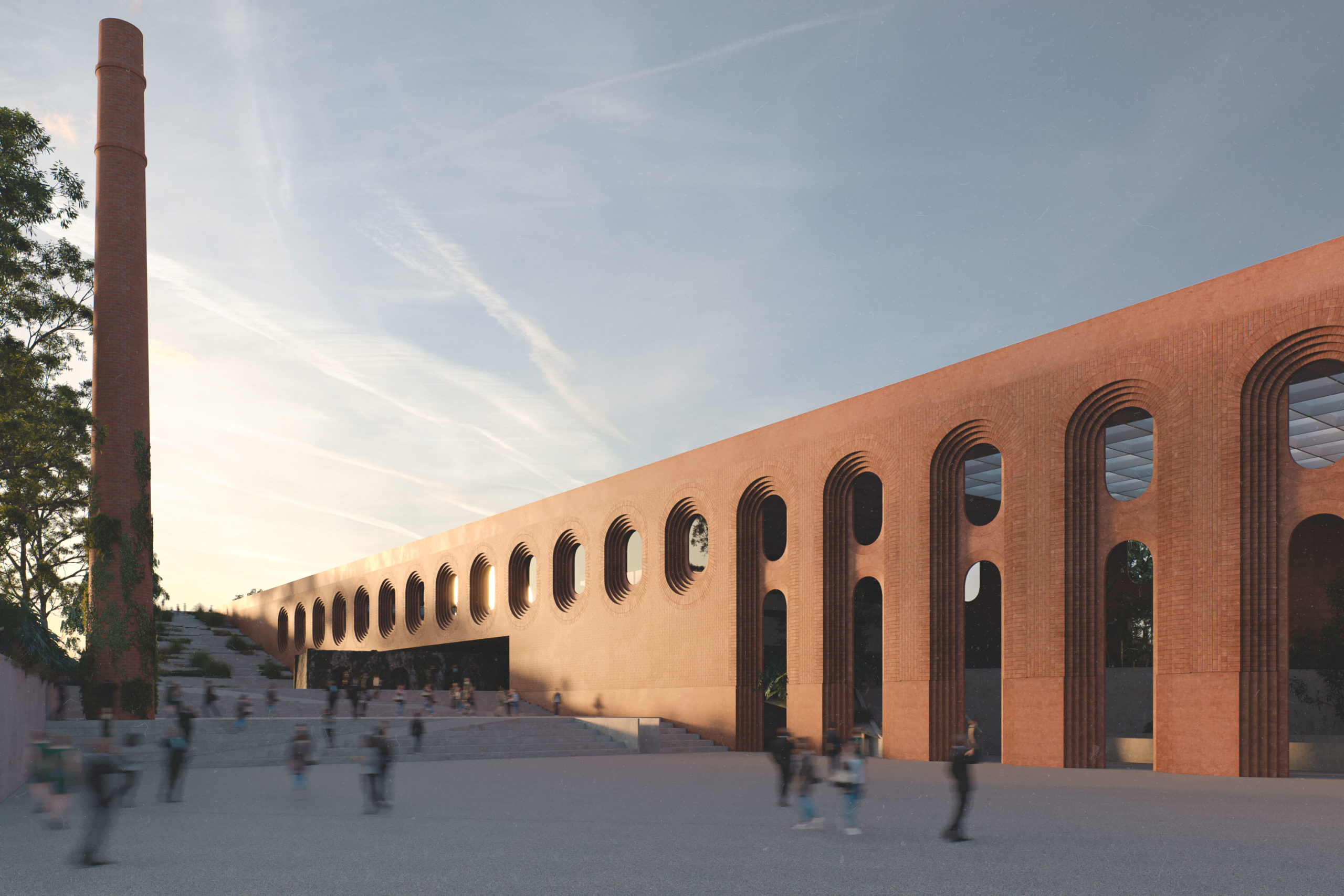 MAG aspires to be a modern, conscious and sustainable factory, where nature, architecture and the city coexist.

Located in a territory historically and still mostly dedicated to the storage of wine, our project for the MAG is located in a long plot of great topography and pre-existing ruins of the former Fábrica das Devesas tiles. In the project, the ruin of the French Oven, the two chimneys and the tile display were maintained.

Breaking the local industrial urban fabric, the creation of a place that intends to regenerate and empower an entire area of ​​Vila Nova de Gaia in lethargy and neglect. The project aims to be both an architectural intervention and an urban requalification.

In order to recover the memory of what existed there, the implementation of the project rescues the factory typology and creates a large linear building that, coming from the topography, steps internally. Different levels are created for different uses and different views of the exterior are promoted, as well as a “promenade architecturale” inside.

Thus, the ambitious project seeks to mimic the cellar landscape in an equally imposing and long form.

In addition to the respectful form of a glorious past, in this “environmental factory” we sought in history a materiality that sought to suggest a relationship with the projected context. Thus, the use of arches, bricks, metallic elements, glass, pre-fabrication and the memory of the large factory spans emerged. 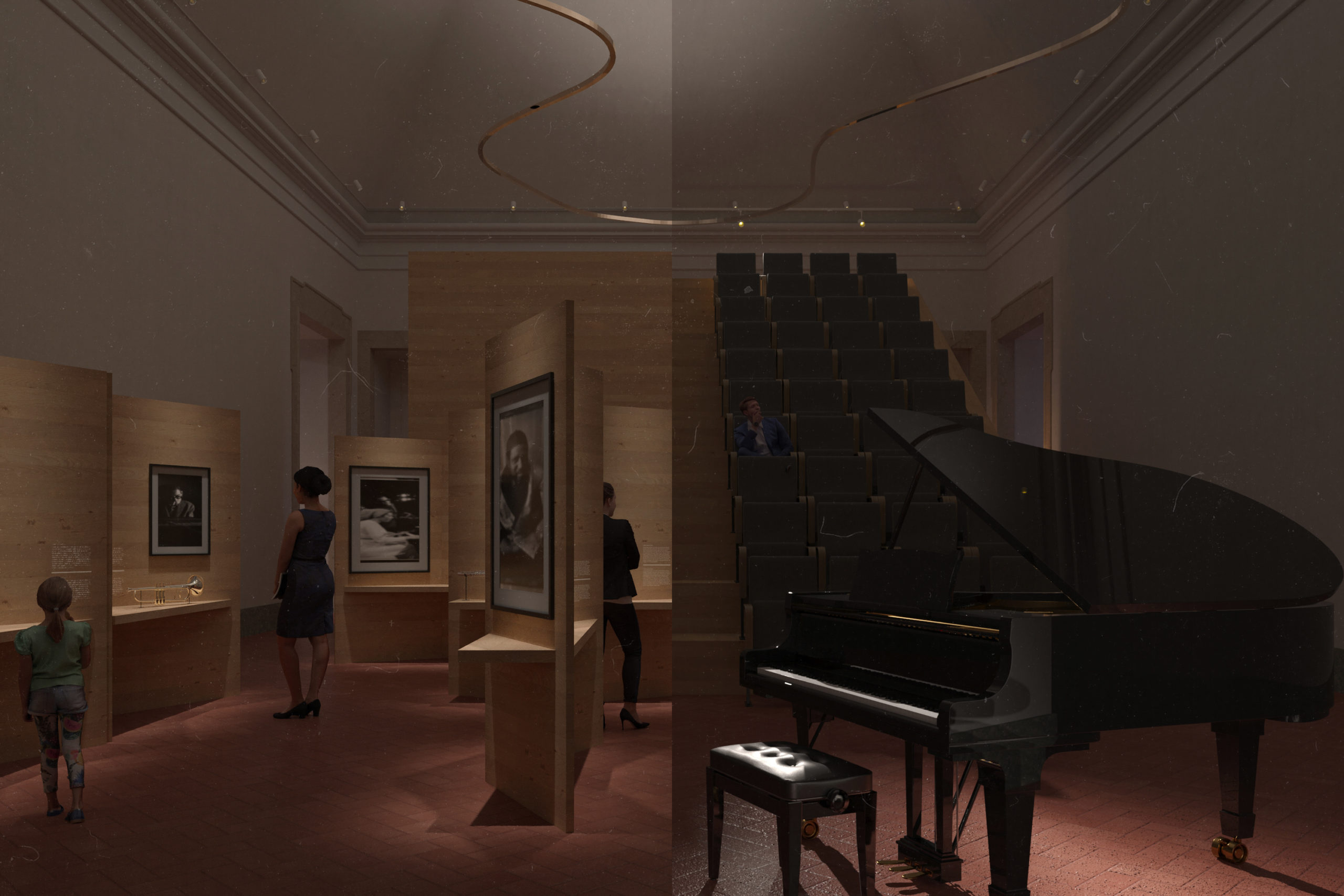 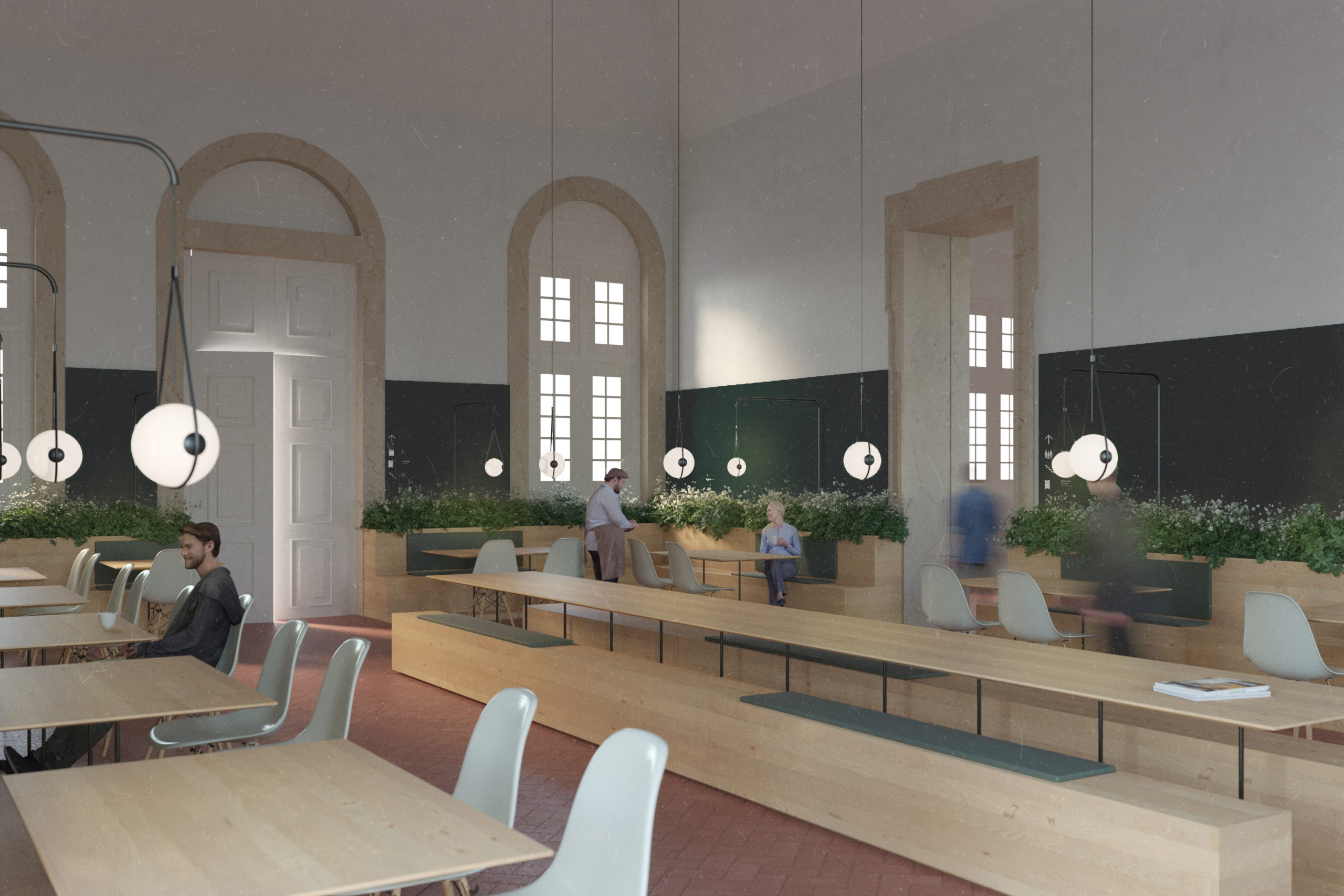 Our proposal aimed to present a material representation in which the museographic melody, the history of music and the instruments that embody the collection of the museum. A base that would offer the rhythmic structure of bars, the musical dynamics offered by museography.

This score was born from the very configuration of the museum, in its succession of rooms that offered the rhythm of bars, on which a musical staff was added, continuous horizontal elements that occupy several dispositions along the system – floor demarcations, exhibitor elevations and seating areas. This game of controlled elevation originated a succession of intercalated elements, which made possible the structuring of a coherent museological path.

The organization of the exhibition was thought by scopes is in order to organize and guide the public’s experience through the museum. Starting with an Introduction moving torwards the Cordophones, the Membranophones, the Idiophones and the Aerophones.They were organized according to a typological classification to reveal the museum’s collection in an interdisciplinary manner that provides multiple connections and interpretations. The final scope aimed to end the museum experience by connecting all the contents and generate a strong affective connection through a great body interaction. As for the exhibitors, they were idealized as integrative elements of the spatial continuum, where they would display a mixture of contents from the four collections of the museum (instrumental, iconographic, phonographic and documentary).

The terrain being inserted in the suburb of Quarteira, it is an area that was purposely for created for cultural activity in the masterplan developed for the area. The land allows a certain permeability and connection to the existing urban fabric through the park in the southern part of the terrain. Given the nature and scale of the surroundings the morphology and aesthetic of the project is pure, discrete but also imposing due to the nature of the programme. The simplicity of the proposal should also allow for a clear understanding of the different volumes and functions that incorporate the building.

The project envisions a public and mineral square which allows for an organic continuance of the surroundings, both in the landscape and urban scale. Between the concrete blocks a suspended corridor extends the public realm and connects them. Covering the volumes, a concrete slab crowns the programme and gives a unity to the whole in a subtle architectural gesture. The central square, wide and bare, both the point of departure and arrival, it becomes a stage for activities and social interactions hence it creates an axis connecting itself to the wild natural park in the posterior façade of the Cultural Centre.

From the centre of the square outwards, two opposite poles were created to purposely separate the education and the cultural parts of the programme. On one side of the square, the Dance academy sits in a single volume of two storeys. The programme in the ground level has the studios around the gardens of the natural park, in the first floor the academy is connected to the cultural centre through the suspended corridor. On the opposite side of the square the public cultural programme is situated in the form of two main volumes, one lower block with two storeys and a higher semi-burried block with four storeys.

The access to the Cultural Centre is through the ramped square that gives a crescent sensorial monumentality to the building as one approximates to the main entrance in the lower central volume. The entrance which leads to the Foyer, which connects the user to the Auditorium, black box, store, café as well as the administrative area. The alternative access to the building is through the corridor which begins at the street level and connects to the foyer through a public ramp behind the Auditorium building. This ramp revolves a small garden patio and arrives in front of the auditorium entrance in the inferior level allowing for a glass mural to permeate the light inside the foyer. Conceptually the suspended corridor is to be open and public at all times,

guaranteeing the autonomy of the library and dance academy in relation to the Cultural Centre.

For the Façade, the building has a pre-fabricated and exterior concrete skin composed of modular slabs. Only differing in height, the consistency of the measurements throughout the façade of the project allows for a rapid and less costly production of the concrete slabs. Slabs that should be assembled in-loco. This skin, given its depth acts as a brises-soleil to the interior guaranteeing comfort for the functions to be carried out on the inside of the building.

The orientation of the building is created to have the areas of most permanence such as the administrative areas and café facing the south facades with the best solar exposure, having sunlight throughout the entire day. Facing north are the functions that don’t need as much light, such as the bathrooms and circulation areas. The dance academy benefits from a south-east/north-west disposition allowing for the brises-like façade to filter the light and allowing for an indirect type of lighting to enter the studio rooms and classrooms. 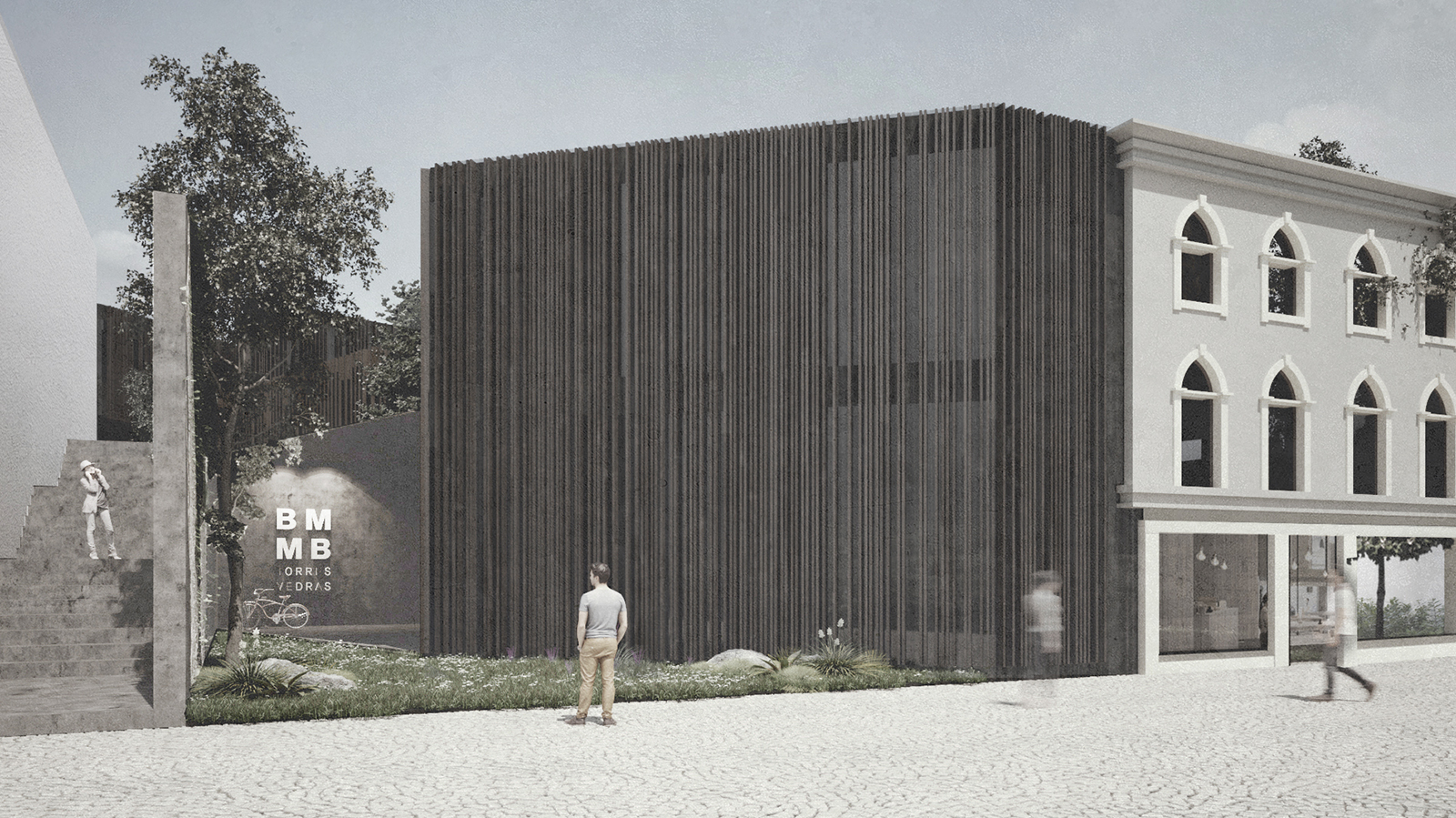 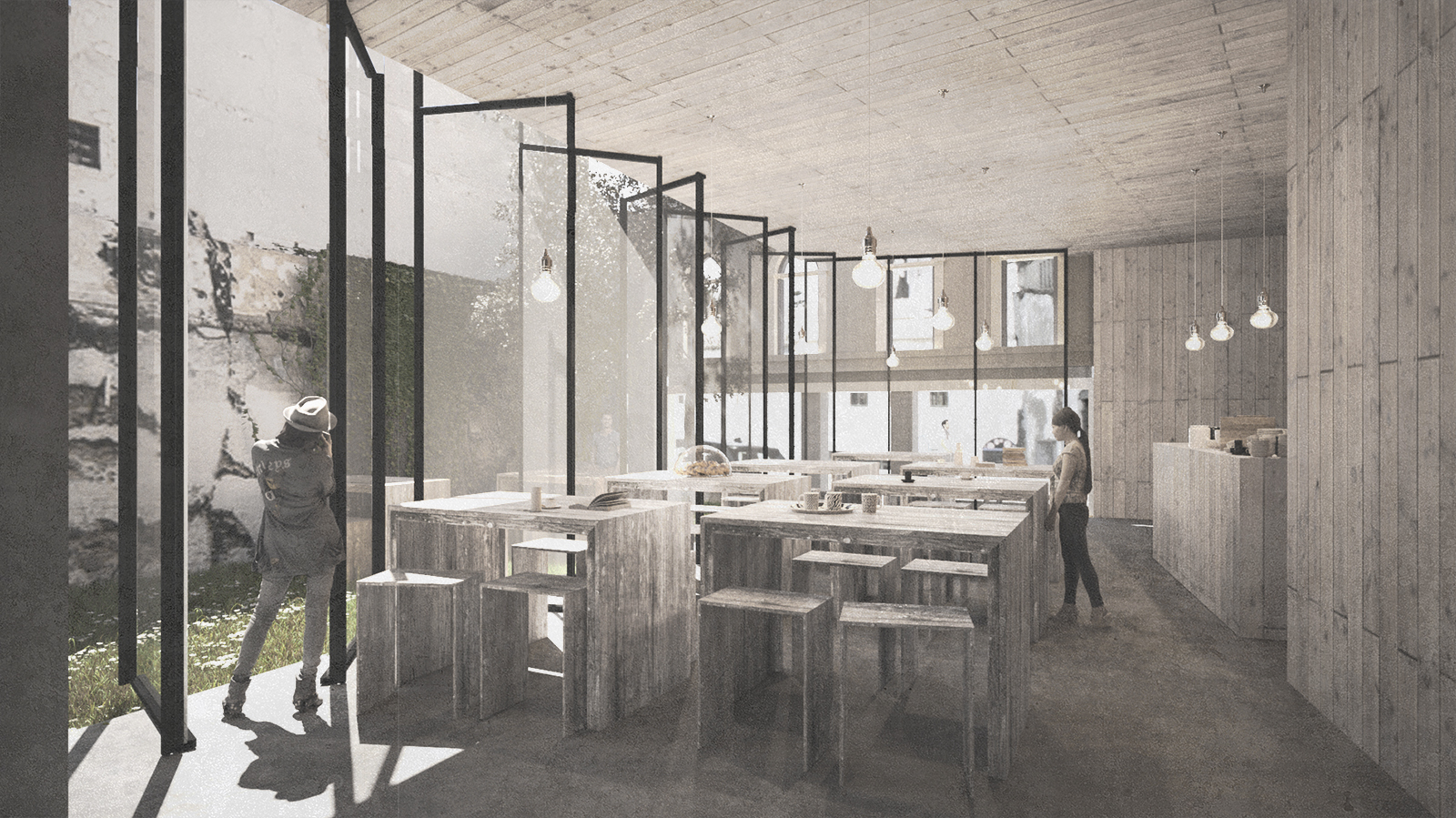 This project is Apparatus’ proposal for a public tender for the MBBM, in Portugal. The program integrates the two typologies in order to offer an open core of activities for the population

The area of intervention is the limit between the historic pedestrian zone of the town, and as many other historic centres of European cities they have a complete disregard for the public green spaces. Hence the concept was to give this constricted urban fabric a green and open garden for leisure and to allow for outdoor communal activity to happen.

This garden is elevated to allow for the Museum Atrium connect the various programmes on the base level. From the converging circulation axes that connects the pedestrian part of the town to the rest of the city and the Church Square shape the Museum and Library blocks. These blocks are broken once again to allow for the natural light and ventilation into the project. In order to allow for a versatile and efficient solution for the solar incidence in the buildings the project proposes wooden brises-soleil, which allows for a controlled and indirect light to enter and to adapt to its diverse programme. Besides the Library and the Museum, the third block is the Café/amphitheatre, and it is placed to allow for its functioning to happen independently from the rest of the programme. It was also a premise of the syllabus to maintain the historical facade which functioned as the entrance of the café which led to a piece of urban art done by the Artist Vhils.